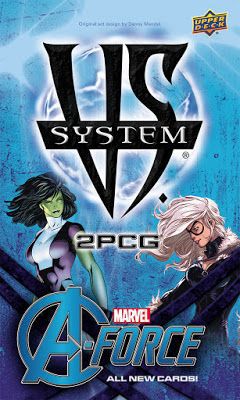 In the Vs System 2PCG card game, players choose a main character, build a deck with exactly sixty cards, and attempt to stun the other player's main character in a game of superhero battles and suspense! The Vs System 2PCG: A-Force set — which is playable on its own in addition to serving as an expansion — features new playable content based on Marvel's A-Force.