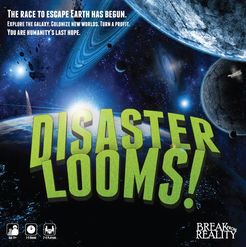 The Earth is probably doomed, and rumors and speculation run rampant. Newspaper headlines from across the globe stir the populace to desperation:

The race to escape Earth has begun! With the world's nations in decline, powerful corporations now stand as humanity's last hope. Take the reins of one such corporation, as CEO, and venture out into space. With your mission in hand; build ships, collect resources, research technologies, survive the dangers of space exploration, and, while ticket sales hold steady, preserve the human race. Remember to stay a step ahead of competing corporations, which can use slick marketing campaigns and 10 cent tchotchkes to buy the loyalty of the people you just saved from certain doom!

In Disaster Looms!, players are rewarded points for sticking to the mission and building colonies, and saving colonists. As you are a CEO you are also rewarded points for filling the Corporate treasury, and building the company's value proposition by retaining rights to the best technologies. Gameplay is fast, and exciting. Events, and the vast variety of hazards that space has to offer will keep you on your toes, and your underlings busy on the paperwork for decades to come!

The game is played in five phases: Research, Fleet, Management, Revenue, and finally First Player Turn Auction. All players will complete each phase, in turn order, before proceeding to the next phase. This helps to keep the game moving, and keeps players engaged. In Research phase players can pay to research, or choose to license another players tech. In the Fleet phase players get one action with each ship they own. The Management phase is when players build new ships, special tech items, and sell technology to the public domain. The Revenue phase is when players collect their hard earned resources, including a small stipend from their home office on Earth. And finally, the turn auction phase is a bidding war for who goes first. Not that important at the start of the game, but monumental for the end.